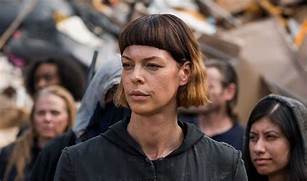 There is an interesting episode 10 this week because in one episode there are several figures depicted in each scene, such as character Michonne, Negan, Enid, Simon, Jadis, and Rick. At the Scene, early Rick looks shaky and saddened by the death of Carl. He still hasn't got a plan to tackle existing conflicts and conflicts that occur with Negan.

Michonne also looks sad at the sight of Carl and Judith handprints that are front of the House, as if Carl has prepared his departure and gives a memento to those that still survive. After packing up stuff and go with Michonne, but before that they tried to put out the fire at an ordinary place cottage Carl sat the roof terrace. In the middle of a trip, Rick wondered, what is the last word Carl, what are Carl is to stop fighting the Negan and give up that? Michonne gives some letters written between Carl and the no-name Negan. But Rick has not been willing to read the letter. Rick also annoyed why Carl wrote a letter to Negan.

That time Rick garbage team wanted to achieve because at the time of the invasion, Rick Negan headquarters together with a team of garbage. Once they entered the headquarters of the garbage team the conditions had changed, they had outright by walkers. At the same time, Negan met Simon, he's still figuring out how the people of Alexandria Negan ever manages to escape, do not know about the death of Carl at the time. Negan Appoints Simon to visit garbage team to give warning to traitors, the message is effortless, the Negan "kill one and all else will follow".

After accidentally killing Natania Enid and Aaron held and taken prisoner. Enid managed to speak with Cyndie and want to convince Oceanside to help his group fight Negan, but it becomes useless because Oceanside himself refused to fight and try not to be concerned with the conditions experienced by the Enid and his group. They seem to still hurt when Tara does not keep his promise and told of the existence of Oceanside to Rick. After being expelled from Oceanside, Aaron and Enid parted, Aaron told Enid to drive home and Aaron remained in Oceanside has a plan and Aaron trying to sneak to meet and convince Rick to help Oceanside fortress to resist the Negan.

In the last Scene of the chat between Negan and Rick discusses their war, Rick told his son that Negan had died. Negan looks sad, look on his face was different when heard Carl died. Negan has planned against Carl because Carl Negan sees as "the future". Negan continues to blame Rick death up Carl, Negan cornered Rick with all the decisions that made the closest people were killed.

The seat of the figure hereafter colleagues in team Garbage deprived died because all the weapons and shot dead by Simon be like losing direction. The seat became the mysterious figure, whether what is in his mind in the scene after the "grind" of all his colleagues. After he became a warrior alone, an awful lot of viewers after seeing Gen. Rick almost shot dead Jadis, wanted the seat into a figure of Alpha, a leader of the evil that is in the next story after conflict Negan. Let's enjoy all the hubbub that occurs in the walking dead Season 8.
Facebook Twitter Telegram