The Walking Dead Season 8 Episode 11 "Dead Or Alive Or" 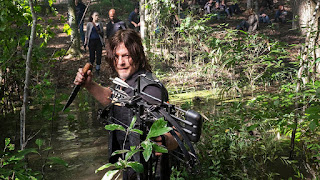 In this Episode telling the leadership group that brought Daryl Alexandria headed to the Hilltop. Of the matter, they still hunt Negan existence of the Alexandria group manages to escape when the ambush. They walk away from the main road and had to down the forest. Visible cues Daryl and his group will, Tara still puts revenge to Dwight, Tara tried to kill Dwight way deliberately throw zombies towards Dwight.
In the middle of the journey, they have to stop and start to discuss on a secure line to the Hilltop. Dwight suggests to Daryl for passing through the swamp, Dwight sure Negan will not put his men around the swamp because the place is very dangerous and difficult to follow. With the weight of the decision and still less their confidence in Dwight, Daryl approved the suggestion of Dwight, Daryl tried to take them across the Marsh. The first thing they should do is look at the condition of the existence of the swamp zombies. Daryl invites some of his colleagues to try to explore the swamp and leaving Tara and Dwight on the Hill. 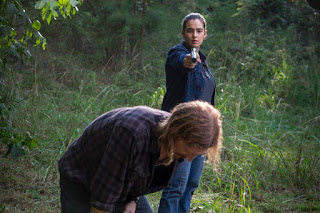 There are interesting events while Tara and Dwight are above a hill, that moment came to a few swarms of zombies, Tara throws his knife and invites Dwight to kill the zombies-the zombies. After running out of their zombie kill, Tara still intrigued with Dwight and tries to kill Dwight because had killed her lover.
The moment occurs clamor, appear, servants, Negan surrounding swamps and intend like to comb out the existence of a group of Alexandria in the swamp area. Dwight coming out of hiding and try to dissuade them to comb through the swamp and try to bring them to other areas for their checks. The servants Negan who will see this swamp knowing that Dwight has defected to Negan. Before Dwight was in this scene, she has given a statement to Daryl and Tara that she was trying to help a group of Rick and will fight the Negan. 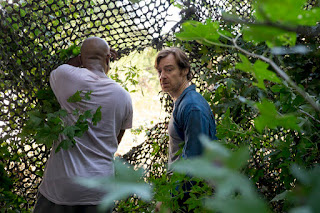 Elsewhere, Dr. Carson and Gabriel who successfully escaped from the headquarters Negan got lost in a forest with the condition of the car they were traveling suffered damage. Gabriel as if getting instructions from within the forest and hears a Bell according to the hearing of Gabriel. Gabriel turns out to be lucky, found a home in the forest and they use the old House to rest
The condition of the infected bacteria Gabriel getting worse, Gabriel's vision little by little began to blur. Dr. Carson ordered Gabriel to go rest. Dr. Carson finds a room in the House in which there are zombies who may be residents of the House and find a cure antibiotic that they could use on the Hilltop. Guidance received Gabriel eventually very beneficial for both of them, other than they find antibiotic drugs, they also found the car keys and a map leading to the Hilltop. But eventually they caught on as well by the servants Negan and Dr. Carson had to lose it because trying to fight on when caught. 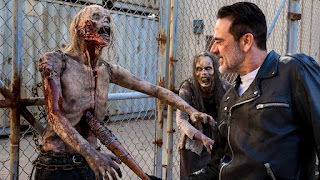 At the headquarters of Negan, he still wished to make Rick cs submissive and obedient to her. Negan gives power to Eugen to continue to manufacture ammunition in the form of bullets for their war against Rick. Eugene seeks to speed up the manufacture of ammunition but with limited supplies of the raw materials, he gives an alternative form of attack tools like Slingshot that contains bodies walker and thrown to the Hilltop.
He is using the tactics of war-era old war occurred when they laid siege to enemy territory, they use the tactic in a way to throw the corpse into the bodies of enemy zones, Eugene thought a result of throwing their dead bodies will become rotten and interfere with their concentration and certainly will create a disease.
Gabriel who became seriously ill and was caught again by the servants Negan brought to meet Eugen. Negan ordered Gabriel to help sort out Eugene's bullet that is still decent and nice to be used again.
Dwight manages to rejoin team Negan. They do not know if Dwight had been betrayed and had expressed a desire to join the Group and tried to kill Rick Negan, he was ready with a plan that has been given by Eugene i.e. surrounded the Hilltop headquarters with the spread of the disease that already exists in the body of the zombies.
In spite of the joy I see Daryl and the Alexandria group up on Hilltop, but there is the sad news that made the residents of the Hilltop saddened by the death of Carl. Enid who had returned to Hilltop after making the long trip must feel sadness because Carl has no. I was there ostensibly to meet him and say, "never mind's honey, don't be sad, I am still here for you”. J 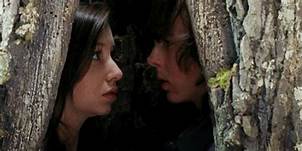 Let's look forward to the next episode, where during the last scene there was a shout from one of the gatekeepers at Hilltop that Rick has returned. Of course, between Rick and Negan already have their own tactics and plans to drop each other. I do not know what will happen in the next episode, but we still wait patiently and watch the war between the two camps quietly without any disturbance from the spoilers.
Facebook Twitter Telegram