John Walker Will Lead Dark Avengers? -The Falcon and Winter Soldier series has introduced us to the new Captain America figure. 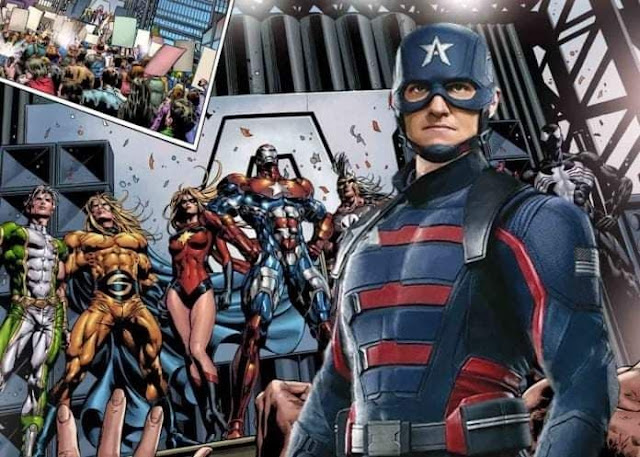 John Walker Will Lead Dark Avengers? -The Falcon and Winter Soldier series has introduced us to the new Captain America figure.

Unfortunately, the figure of the new Captain America is not liked by superheroes and some people.

The reason is, John Walker is the opposite of Steve Rogers, where John does not have good morals, and does various bad ways to complete his duties.

The presence of John Walker in the MCU has indeed provided a new color for the MCU.

But John Walker's presence in the MCU might give a big sign of the appearance of Dark Avengers, and maybe the team will be captained by John Walker himself.

Dark Avengers are tools, not teams

In the Marvel comics, after the events of the Secret Invasion, Norman Osborn became a figure loved by the public because he helped prevent the Skrull invasion.

That's why Obsorn was appointed head of SHIELD in such a short time. When he became head of SHIELD, he changed the name of the organization to HAMMER and formed his own version of the Avengers organization, Dark Avengers.

But unbeknownst to everyone, the Avengers team formed by Osborn actually consists of villains disguised as heroes.

Even the villains disguise themselves as familiar heroes to hide their evil identities.

Dark Avengers, of course, is a frightening threat. But because of the individual members' selfish feelings, they were unable to cooperate without Norman Osborn's guidance. They are more like tools used as weapons, and not as peacekeeping teams.

When Steve Rogers was first introduced to the world as Captain America, he was also introduced as a "tool" used by the United States government to increase the morale of soldiers during war.

What made Steve Rogers even more famous was his morals and beliefs. Steve Rogers has always held on to his beliefs that he held true, even if the rest of the world saw them as faults.

Of course that was Steve Rogers' weakness, but it was also one of his strengths as well. That's what Bucky and Sam also did on their journey as superheroes.

As for John Walker, he defined his beliefs in the same way as Steve Rogers. Long before he got the title Captain America, Walker was the "tool" used by the United States government, and Walker had to do what he was told. But belief alone is not enough to become a Captain America.

A Captain America must also have good morals, like Steve Rogers. Without good morals, John Walker was very vulnerable. That's why John Walker actually fits into a team like the Dark Avengers, who move according to their beliefs, without any good morals.

The MCU Introduces Characters Who May Become Dark Avengers

Of course John Walker couldn't be the only member of the team. He needs other members to complete Dark Avengers. Fortunately, phase 3 and 4 of the MCU have introduced characters who can become members of the Dark Avengers.

In Spider-Man: Far From Home, we are introduced to Mysterio disguised as a hero. And even though he was defeated by Spider-Man and killed at the end of the film, Mysterio still maintains a positive image in the public eye.

It could be if Mysterio actually faked his death and somehow he reappeared in the MCU.

If Mysterio returns, he joins John Walker and fools the public into being considered a hero.

But Yelena's past in the comics is similar to that of Natasha Romanoff (originally a villain, but gradually realizes her mistakes and becomes good). It is possible that Yelena will be a member of the Dark Avengers at the beginning of its appearance.

In the fifth episode of the Falcon and Winter Soldier series, we are introduced to a new character adapted from the comic. She is Contessa Valentina Allegra de Fontaine, a former SHIELD who eventually becomes a spy for Hydra and goes by the name Madame Hydra.

Shortly after John Walker was released from court, Fontaine approached John Walker. Fontaine insists that what John Walker did when he killed Nico was something that was right.

Fontaine also gave a blank card, if one day Walker would contact him. This implies that Fontaine needs John Walker's abilities in the future.

While Norman Osborn is the founder of Dark Avengers in the comics, now Contessa de la Fontain is a noble who has political power. He can fund a big team like Dark Avengers.

In addition, currently Hydra has also infiltrated SHIELD and the political sector, which means that Fontaine is able to get public support for the Dark Avengers team he will create.

If the MCU is preparing to introduce Dark Avengers, then the Falcon and Winter Soldier series is the perfect place to introduce them.