Shadow and Bone, a Fantasy Series with a Amazing World Concept 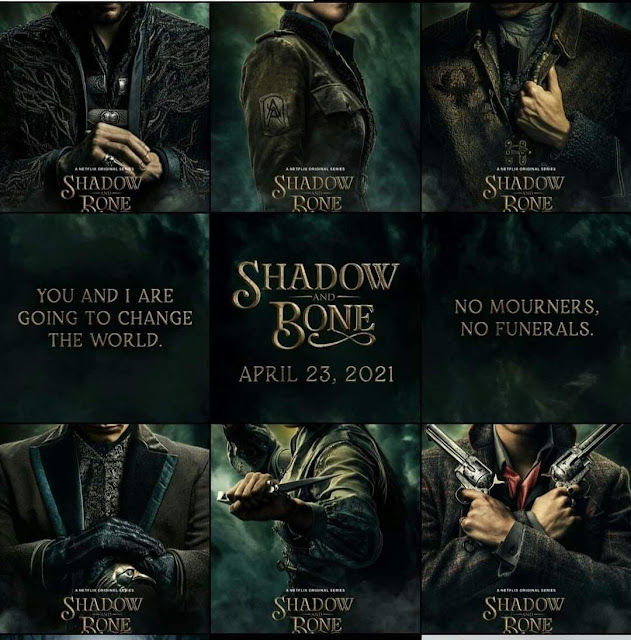 Shadow and Bone, a Fantasy Series with a Amazing World Concept

For those of you who follow the Grishaverse novel series written by Leigh Bardugo, you will be spoiled at the end of April 2021 on Netflix.

You see, starting April 23, you can watch the latest Netflix original series adapted from the novel, namely Shadow and Bone.

This series also involves Eric Heisserer, who once wrote the script for the film Arrival (2016) as the showrunner.

The synopsis of the Shadow and Bone series tells the story of Alina Starkov (Jessie Mei Li), a girl who serves in the mapmaking division of the Grisha Army.

However, one day Alina learns of the fact that she is a Grisha with tremendous strength. Alina's ability to create this light is the key to the safety of her world shrouded in darkness.

A Fantasy Series That Is Quite Confusing at the Beginning

The Shadow and Bone series takes place in a fantasy world called Ravka, and there is a special force with magical abilities called Grisha.

However, in that world there is also a region full of darkness and a terrible monster called the Shadow Fold which was created by an evil Grisha hundreds of years ago. This also makes humans have to be able to live side by side with the region.

The existence of the Shadow Fold can only be destroyed by Grisha as the Sun Summoner who has the magic ability to create light which is the weakness of the area.

Unfortunately, the existence of this Sun Summoner was only considered a myth. You see, there has never been a Grisha with the power of Sun Summoner since Shadow Fold appeared hundreds of years ago.

However, when Alina Starkov, who is only the mapmaker of the Grisha Army, goes on an expedition to the Shadow Fold, she accidentally releases a burst of light that saves her from the area.

It turns out that Alina is a Grisha as well as a legendary Sun Summoner figure that the whole Ravka has been waiting for.

After that, Alina also received help from General Kirigan (Ben Barnes) who was the highest leader of the Grisha Army to master her strength.

Now, Alina also has the burden of saving a world that has been miserable because of the existence of Shadow Fold for hundreds of years.

For those of you who have read the novel, you must have been able to grasp the outline of the storyline of the series since watching the first episode.

However, those who have never read the novel may be confused at the beginning and will guess how the story will go.

This is because the concept of the world and the background of the characters have not been described in detail since the first episode.

However, Eric Heisserer as the showrunner did this on purpose with the hope that the audience would understand after being captivated by his character's journey.

So, those of you who don't read the novel can still understand the story if you continue to follow the episodes of the series. So, if you can, don't stop watching immediately after the first episode, because the story will be even more exciting as the series lasts.

Apart from the concept of a fantasy world with a compelling story, another attraction in the Shadow and Bone series is the acting of the players.

The most prominent actor in this series is Ben Barnes who plays General Kirigan. Barnes can be said to have succeeded in exuding a charismatic, dark aura from Kirigan who turns out to have a dark secret about Ravka's history.

Jessie Mei Li, who plays Alina Starkov, who is the main character, is also quite entertaining and feels right with the main character. Li's appearance in the series, which became the first major project in his career, could also be used as capital to be involved in films or series from other well-known franchises.

The acting performance of a number of other players is also quite attractive, including Archie Renaux as the actor of Mal Oretsev who is Alina's best friend.

However, their acting is arguably not that prominent when compared to the performance of Ben Barnes and Jessie Mei Li.

The Crows Gang Chemistry That Stole the Attention

Apart from the novel Shadow and Bone, this series also adapts the story from the book Six of Crows which was also written by Leigh Bardugo and was part of Grishaverse.

The three of them were also involved in a mission that would later connect with Alina Starkov the Sun Summoner.

So, as long as they are on this mission, you will be really entertained by the interaction of the three. Because, even though they don't have magic skills, their adventures seem more fun and interesting when compared to Alina's story.

Moreover, they have different backgrounds of traits and abilities, such as the manipulative Kaz, Inej who is good at fighting, and Jesper who is good at shooting but always acts silly.

As discussed in the first point, there is a special troop called Grisha who has magical abilities.

The Grisha are divided into several groups with various magical abilities. For example, Heartrender which can manipulate heart rate, Inferni which can create hearts, Shadow Summoner which can summon shadows, and many more.

Every time the Grisha uses their abilities, you will be presented with stunning visual effects and are at the level of big Hollywood films.

This also makes a number of these magical abilities seem real. Besides that, the choreography of the Grisha every time they use their power also doesn't seem strange and disturbing.

Apart from having various magical abilities, Grisha also have different costume designs for each division.

The difference in these costumes also lies in the color and also the embroidery motifs. This also makes it easier for the audience to distinguish the various Grisha in the universe.

Broadly speaking, the Shadow and Bone series is suitable for those of you who have read the novel or just like to watch fantasy genres with interesting world concepts.

If you are interested, this series can be legally watched on the Netflix streaming service starting April 23, 2021.